You're a postgrad student who's just gotten a job at the swanky Café Milan -- but things here are not quite as they seem. Team up with your chosen love interest to figure out what's really going on.

We made this free project for fun as part of the Otome Game Jam 2021, but if you'd like to show your appreciation with a tip to support the writers, please donate here: https://ko-fi.com/franceswritesgames

Juliet (she/her):
-Route: Juliet is blunt and aloof, but you see her softer side in the way she cares for her friends at the café. When you both find a way to get her away from an unwanted relationship, you take it, but there may be more dangerous forces at work...
-Age: Late 20s
-Shakesqueer?: Bisexual

Oberon (he/him):
-Route: Oberon's an unapologetic flirt with his eyes on you. The start of your relationship is magical (did he just say he's king of the fairies?) but this polyamorous man seems to keep getting in trouble with his wife Titania and boyfriend Puck. Is Oberon the midsummer night's dream man that he seems or is his magic too good to be true?
-Age: Late 20s
-Shakesqueer?: Trans, pansexual

Ophelia (they/them/she/her):
-Route: After betrayal and loss, Ophelia has left sweet words to the silence of their flower arrangements. Meeting you begins to heal her heart, but can she find the courage to truly open again?
-Age: Early 20s
-Shakesqueer?: Yes, very

Richard (he/him):
-Route: Clever, sophisticated, but insufferably arrogant, Richard vows to make great strides in architecture while managing his scoliosis. Your wit and idealism win him over quickly, but will his raw ambition drive you both to tragedy?
-Age: Mid 30s
-Shakesqueer?: Bisexual

As pointed out by other comments, the art and visual style here are both lovely. Personally, I found the overarching plot (vague to avoid spoilers) rather confusing, even as a fan of Shakespeare, but Ophelia's character writing in particular stood out to me as very sweet and kind in a soothing way.

Also, just as a PSA for others: some characters are quite touchy and/or flirty, and you as the player don't get an opportunity to say no to or express discomfort with the behavior. The game, for example, railroads you into being attracted to/liking Oberon, whereas his immediate forwardness and touchiness, even when the MC shows as little interest in him we are allowed to, made me as a player very uncomfortable.  I just wanted to put that out there for anyone else thinking of playing this who has trauma/is touch-averse/prefers a slower pace.

Overall, this is a nice project that I'm glad is resonating with other players, even if it wasn't wholly my cup of tea, no pun intended. :)

The art stands out at first but once I went through playing it, the characters was the right point that made me feel at home.

Their relationship with each other is the gold key to me. This helped a lot to understand every character and know them better. The scene at the bar is just amazing!

Also the writing! It’s clear, relaxing and easy to understand. I think I could enjoy the game a lot more just because of it. I can't choose my fav LI because they are all amazing and own a place in my heart 😭❤️ but I think Oberon and Richard just won it (because they made me blush ><)

Ooh this looks nice, I'm interested. Can we choose the pronouns for the MC?

It was incredible and so beautiful, loved all the characters and the story! You did an amazing job!!!

The writing is genius, and it's nice to see an MC that's smart but not overrated. I loved every character, to the point that I couldn't choose which LI to pursue. My first crush is Ophelia though, they are so soft and adorable! However, a certain man stood out to me eventually:

This specific sprite of him looks so good! I also melted when I found out we had the same preference for flowers, I love him! Plus he's a bisexual mess like me.

I tried to avoid any spoilers, but overall I love this game so much!

The art for this is so great! I love the warm colors and style so much!

Hey for the current version of the game, is there no audio?

No audio, sorry! Hopefully in a future patch. 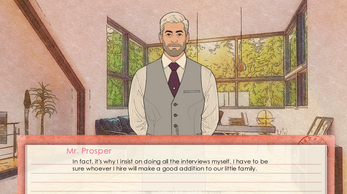 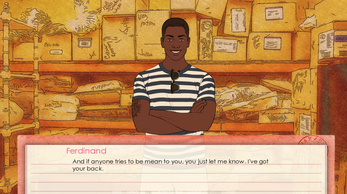 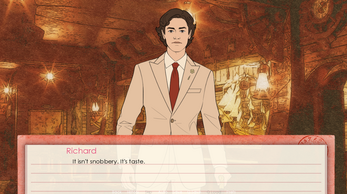 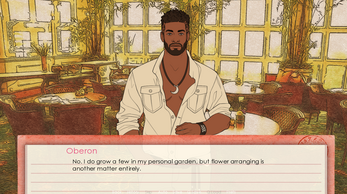 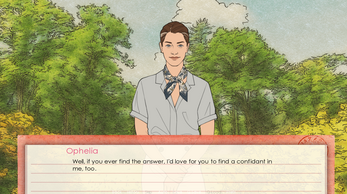 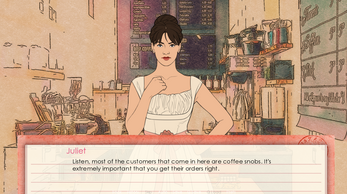